JUPITER, FL— A concerned Texas mom finally has answers about the cause of her son’s sensory-processing problems thanks to a special collaboration among her patient-advocacy group and the lab of Scripps Research Neuroscientist Gavin Rumbaugh, PhD. 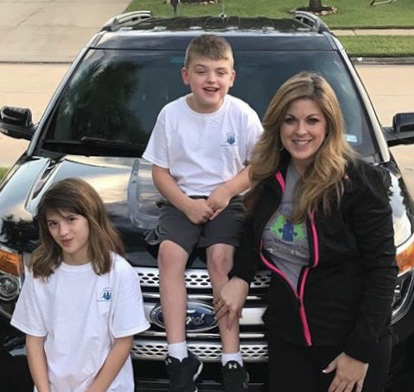 Monica Weldon of Cypress, Texas, says her son Beckett, a 10-year-old fraternal twin, has never experienced pain the way his sister, or other children, do.

“His pain threshold was so high,” Weldon says. While he had signs of autism, he had other symptoms that were not typical. “He walked around with a broken finger for four days and we didn’t know it was broken.”

Beckett has a genetic mutation that results in deactivation of a gene called SYNGAP1, which is critical to healthy brain development. Rumbaugh’s research, published in the journal Nature Neuroscience, for the first time links disordered touch and pain processing to SYNGAP1 mutations. Rumbaugh and his co-authors note that children born with only one working copy of the gene are known to exhibit a wide range of symptoms, including autistic traits, epilepsy and intellectual disability. Analysis of a patient registry that Weldon helped assemble, plus a series of experiments in an animal model of the condition, led to the discoveries.

“We knew SYNGAP1 was critically important for synapse plasticity,” or experience-driven changes in neural circuitry, says Rumbaugh, the study’s senior and corresponding author.  “What we found is in addition to that, it also seems to regulate how many connections are made in the brain’s primary somatosensory cortex, in how we process touch-related sensory information. That was a surprising finding.”

It was surprising, in part, because previous research showed that SYNGAP1 mutations cause hyper-sensitivity in the other senses. The processing of hearing and sight may be on overdrive, and yet they found that touch awareness and pain sensation barely register in somatosensory circuits.

Weldon says that paradox describes her son’s challenges exactly. While he ignored dog bites or skin burns, the sights and sounds of a simple trip to the grocery store overwhelmed him.

“Nothing could relieve him of the over-stimulation,” she says. “He was constantly screaming in the car. You couldn’t go anywhere because of the screaming. We had ear plugs in the house.”

It also may explain why it’s challenging for doctors to prescribe medications to regulate the children’s symptoms, Rumbaugh says.

Many different mutations can lead to inactivation of one copy of the SYNGAP1 gene, Rumbaugh says. Two inactivated copies of the gene are lethal in the laboratory, he adds. The next step will be developing therapies to restore the missing SYNGAP1 gene product, he adds. That work is underway at Scripps Research now. He’s hopeful that catching the disorder and treating it early may make it possible to prevent some of the developmental and intellectual disabilities, or to avoid the seizures.

“We think that it’s likely that the sensory deficits that these children experience contribute to their altered learning and thinking,” he says. “If the who, what, where, and when information is coming in incorrectly, you would expect it is going to affect behavioral responses to touch, as well as thought processes that are generated from touch experiences.”

For Monica Weldon, learning the source of her son’s developmental challenges has been life-changing. A former science teacher, she shares authorship of the Nature Neuroscience paper.  The patient advocacy group she founded, Bridge the Gap – SYNGAP – Education and Research Foundation, has spent years working with Rumbaugh’s lab to build a scientifically valid patient registry, and develop and distribute questionnaires.

Weldon recalls the difficulty of learning why Beckett was so different from his twin. The identification of the SYNGAP1 gene as disease-causing wasn’t identified until Beckett was 1 year old. She visited more than a dozen doctors trying to find a cause. She finally had to take out a loan to pay the $13,000 whole genome exome test that her doctor ultimately suggested. On learning of Beckett’s status, she created the first SYNGAP1 Facebook page in the hopes of finding others. That group eventually grew into the non-profit. Beckett and his sister are 10 years old now. Nearly 200 families have joined the patient registry used for the study, and 48 different families uploaded detailed medical history data, including answering detailed questions about sensory function in their children. Of those, 45 of 48 described obvious sensory processing impairments, Rumbaugh says.

SYNGAP1 mutations are rare, but recent studies have estimated that tens of thousands of individuals globally may live with it, Rumbaugh says. Families learn of their child’s SYNGAP1 status only after pediatricians notice missed milestones and then order genetic tests, he adds.

Thanks to the internet and Bridge the Gap, families are finding each other and sharing such vital information. The new findings show how powerful these connections can become when families partner with scientists like those at Scripps Research, Weldon adds.

“The families educate the scientists on the specifics of how their children are affected, and they educate us on how the gene mutations impair brain function at the cellular and molecular level—it’s a win-win for everybody,” Weldon says.

“This open communication is getting us closer to understanding what this gene really does and possibly developing precision medicine approaches for treating these kids.”