Boca Raton-based TherapeuticsMD began distributing its new product, Imvexxy, to stores recently. It will be available at all major retailers such as CVS, Walgreens and Walmart, as well as small pharmacies.

TherapeuticsMD, which is focusing on new health products for women, received approval from the Food and Drug Administration in May to market Imvexxy. The vaginal gelcap insert was developed for menopausal women who suffer from vaginal dryness. 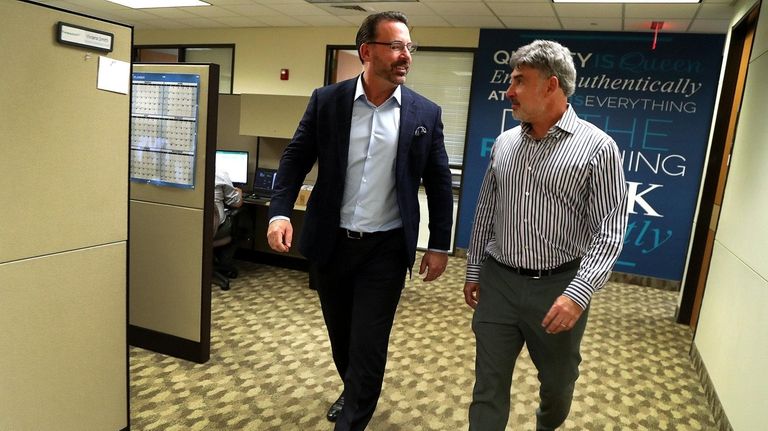 “We expect to have strong demand for the product,” said John Milligan, president of TherapeuticsMD. “A lot of women are going to find it very effective for this condition.

A doctor’s prescription is necessary to purchase Imvexxy, which costs about $35 in an insurance copay or with coupons online, said TherapeuticsMD CEO and co-founder Robert Finizio.

The FDA’s approval of Imvexxy was based on the results of a Phase 3, double-blind clinical trial that evaluated the safety and efficacy of 4- and 10-microgram dosages, compared with a placebo for 12 weeks.

Milligan said that, as required by the FDA, TherapeuticsMD will do follow-up studies on women prescribed Imvexxy, as there is always a risk of endometrial cancer in women with a uterus who use estrogen-only therapy. Imvexxy’s package label warns users to report any unusual vaginal bleeding to their doctor.

But the clinical trial showed that women who tried Imvexxy had “very little or no side effects,” Finizio said. Some women reported headaches, breast tenderness or nausea, according to the Imvexxy.com site.

The treatment proved effective in “less than two weeks” for women participating in the clinical trial, Finizio added.

TherapeuticsMD has built an internal team of 250 sales representatives to introduce the treatment to physicians nationwide. It plans TV and web advertising.

For marketing purposes, executives were pleased that the FDA approved the name “Imvexxy,” Milligan said. “It sounds close to ‘I’m sexy,’ which is a memorable name.”

TherapeuticsMD said its product is different from others on the market because it can be used any time of the day and requires no applicator. It also contains a low dose of estradiol, a form of the hormone estrogen.

Dr. Jay Cohen, an obstetrician-gynecologist in Plantation, Florida, said a low-dose estrogen treatment for vaginal dryness fills “a huge unmet need in this country.” The condition affects about 32 million menopausal women in the United States, according to TherapeuticsMD.

“Fifty percent are sexually active into their late 70s,” Cohen said. “A woman lives 20 to 30 years in menopause, and this gets worse and worse for women.”

TherapeuticsMD was founded in 2008 and went public in 2016. Revenue in 2017 were $16.8 million, primarily from sales of the company’s multivitamins, VitaMedMD, developed for pregnant women.

While the company is still losing money, Finizio said, TherapeuticsMD could turn profitable over the following year, if new treatments are approved and new sales are successful.

TherapeuticsMD also is developing a proposed treatment for hot flashes. The company hopes to receive an answer on marketing clearance from the FDA by the end of October.

That proposed treatment is in the form of one softgel capsule of estradiol, a form of estrogen, and progesterone. Today, many women have to take two different medications to treat hot flashes and other menopausal symptoms.