An estimated 10 million people worldwide are living with Parkinson’s disease—an incurable neurodegenerative disorder that leads to an increasing loss of motor control.

If we could peer into the brains of these patients, we’d see two hallmarks of the disease. First, we’d see a die-off of the brain cells that produce a chemical called dopamine. We’d also see protein clumps called Lewy bodies inside the neurons. 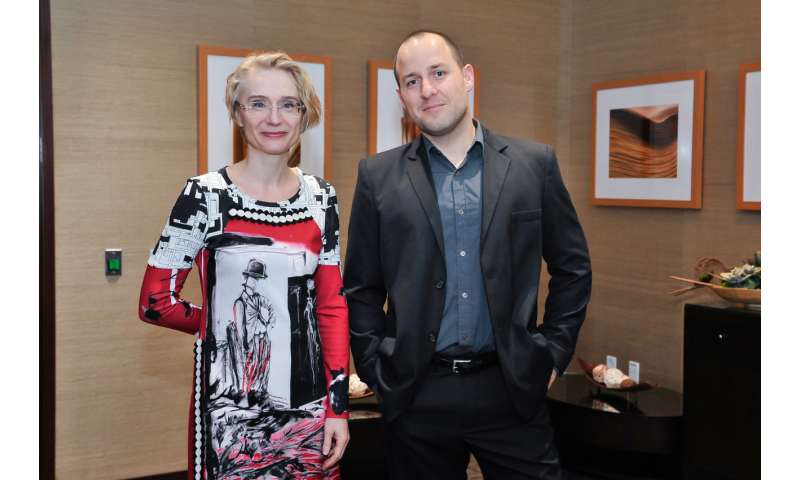 Corinne Lasmézas, DVM, PhD, a professor on the Florida campus of The Scripps Research Institute (TSRI), believes a key to treating Parkinson’s is to study possible links between these two phenomena.

Now her group has discovered a connection between neuronal death and Lewy bodies. The research, published recently in the journal Proceedings of the National Academy of Sciences, offers an explanation for why neurons die off in the first place.

‘This study identifies the missing link between Lewy bodies and the type of damage that’s been observed in neurons affected by Parkinson’s,” says Lasmézas, senior author of the study. “Parkinson’s is a disorder of the mitochondria, and we discovered how Lewy bodies are releasing a partial break-down product that has a high tropism for the mitochondria and destroys their ability to produce energy.”

Toxic protein travels to mitochondria to do damage

Lewy bodies were described a century ago, but it was not until 1997 that scientists discovered they were made of clumps of a misfolded protein called α-synuclein. When it’s not misfolded, α-synuclein is believed to carry out functions related to the transmission of signals between neurons.

In the current study, Lasmézas and her team looked at cell cultures of neurons that were induced to accumulate fibrils made of misfolded α-synuclein, mimicking Lewy bodies in patients with Parkinson’s. They discovered that when α-synuclein fibrils are broken down, it often creates a smaller protein clump, which they named pα-syn* (pronounced “P-alpha-syn-star”).

“Sometimes the nerve cells can efficiently degrade the α-synuclein fibrils, but if they get overwhelmed, the degradation may be incomplete,” she explains. “And it turns out that the result of that partial degradation, pα-syn*, is toxic.”

Diego Grassi, PhD, a research associate in Lasmézas’ lab, made this discovery by labeling the pα-syn* with an antibody so he could follow it throughout the cell after it was created. He observed that pα-syn* traveled and attached itself to the mitochondria. Further investigation revealed that once the pα-syn* attached, the mitochondria started to break down. These fragmented mitochondria lose their ability to carry an electrochemical signal and produce energy.

The researchers followed up with an analysis of mouse and human brain samples. They confirmed the existence of pα-syn* in the dopamine-producing neurons.

“The Lewy bodies are big aggregates and they’re sitting in the cell, but they don’t come into direct contact with the mitochondria in the way pα-syn* does,” Lasmézas explains. “With Diego’s discovery, we’ve made a direct connection between the protein α-synuclein and the downstream effects that are observed when brain cellsbecome damaged in Parkinson’s.”

Lasmézas plans to continue studying the connection between misfolded proteins and the destruction of mitochondria in neurons. “What we found may not be the only mechanism of toxicity, but we know it’s important,” she says. “This paper is about identifying where pα-syn* comes from and what it does to the mitochondria, but there’s obviously, mechanistically, a lot that we still don’t know.”

She says that these findings also have implications for designing treatments for Parkinson’s, noting that some drugs currently under development are focused on getting rid of larger fibrils that make up Lewy bodies.

“It’s important to be aware that when Lewy bodies are broken down, these toxic substances may be created,” Lasmézas says. In addition, she adds, the discovery of pα-syn* as an important component of the disease process points to a new target for creating drugs slowing disease progression.