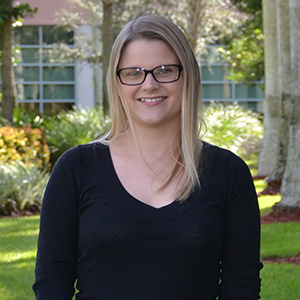 One of the reasons for establishing the JLSI on the MacArthur campus was to enhance collaborations with The Scripps Research Institute. The success of this endeavor is illustrated by a number of publications in the past year. In the past year alone there have been at least 7 joint publications between The Scripps Research Institute and FAU. These publications involve 11 faculty; 5 at FAU and 6 at Scripps. The projects have a common theme in exploring the development and function of the nervous system using genetic and molecular methods.

One example that highlights the ease of collaboration between Scripps and FAU is Melissa Borgen’s career trajectory (pictured left). She started a PhD in the FAU Integrative Biology Program, moved to Jupiter with the Murphey lab in 2013 and finished her PhD in 2014. Melissa recently published her thesis work in the journal Genetics where it was chosen by the editors to be highlighted with one of her images on the cover of this issue of the journal. She has also published a review paper jointly with her new Principle Investigator (Brock Grill of Scripps) and old PI (Rod Murphey of FAU) and has a manuscript in progress on her work with Grill at Scripps. The proximity of the Scripps and FAU on the Jupiter campus simplified her change of institutions, enhanced her ability to continue collaborating and enhanced her career by adding the Scripps name to her resume. Her two papers are listed below and a third is in preparation at Scripps.