Scientists on opposite sides of the globe appear to be getting closer to harnessing one of red wine’s most elusive health-giving ingredients and putting it into a pill.

The ingredient, resveratrol, has been touted for years for its ostensible powers to prolong life and protect against a range of ailments including heart disease, diabetes and Alzheimer’s disease. Studies pointing to those benefits have been performed in laboratories on yeast, worms, fruit flies and mice, among other organisms.

Testing those benefits in humans has proved more complex. Resveratrol occurs naturally in red wine at such low concentrations, and in combination with so many other substances, that studying its health benefits among wine drinkers isn’t practical. And purified resveratrol is broken down in the liver so quickly that it must be given at very high concentrations to prove effective.

A recent human study that suggested resveratrol could slow the progression of Alzheimer’s used a daily dose equivalent to the amount in about 1,000 bottles of red wine, says Scott Turner, director of the Memory Disorders Program at Georgetown University Medical Center, who led the study. Such high doses can lead to side effects such as nausea, vomiting and diarrhea.

Such side effects have caused past efforts to tap the health benefits of resveratrol to founder. GlaxoSmithKline PLC shelved a project to develop a resveratrol-based pill in 2010 after some clinical-trial patients developed kidney problems. The company, which had hoped to develop the drug as a treatment for a type of blood cancer, concluded that while resveratrol didn’t directly cause those problems, its side effects led to dehydration, which could exacerbate underlying kidney issues. 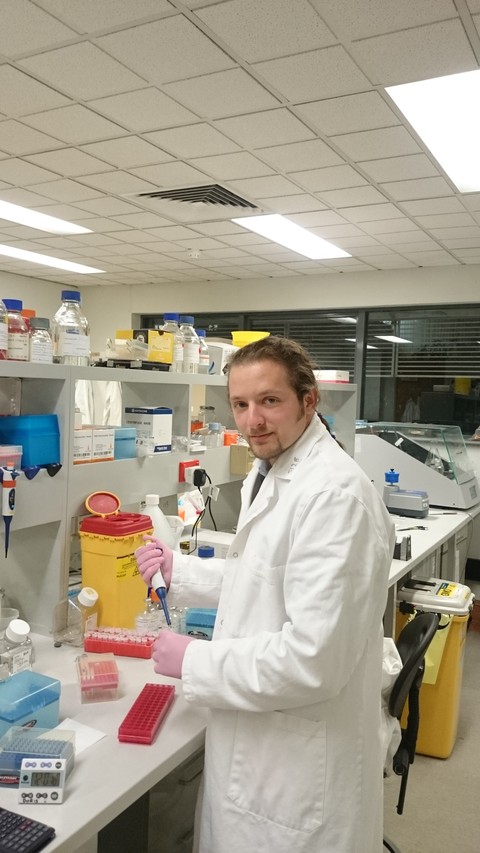 Now, scientists hope to overcome that problem by increasing the potency of resveratrol at more moderate doses. Researchers at the University of New South Wales, near Sydney, suspect the substance is more effective when accompanied by other ingredients found in red wine, which somehow promote its activity. They are developing a pill that combines purified resveratrol with other compounds in wine in an effort to mimic the drink’s naturally-occurring synergies.

Jupiter Orphan Therapeutics Inc., a closely held biotech company in Jupiter, Fla., is taking a different approach. It says it has developed a formulation of synthesized resveratrol that it believes protects the molecule from being broken down by the liver.

Alberto Bertelli, a professor in the department of biomedical sciences for health at the University of Milan, says what happens to resveratrol in red wine when it enters the body “is sort of a mystery,” but he believes that alcohol could help it get into the bloodstream more effectively. In his past research, Dr. Bertelli found that concentrations of resveratrol in the blood of rats given red wine were higher than when animals were given purified resveratrol. Dr. Bertelli has switched his focus from red wine and is currently investigating beneficial compounds found in white wine.

Unfortunately for oenophiles, that doesn’t mean doctors recommend drinking red wine. A mounting body of evidence suggests that the harms of alcohol consumption outweigh any beneficial effect of resveratrol and other compounds.

Resveratrol, which is also found in some berries and dark chocolate, is currently available as a dietary supplement. But there is no convincing evidence that resveratrol supplements work, says Andy Gescher, emeritus professor of biochemical toxicology at the University of Leicester in the U.K.

At the University of New South Wales, researchers have combined resveratrol with two other components of red wine: antioxidants and chelating agents, which have separately been shown also to have health benefits. Nady Braidy, a neuroscientist in the university’s Centre for Healthy Brain Ageing, says the aim is to mimic the synergistic effect that is found in a glass of red wine “without the negative effects of alcohol.” He says the formulation allows researchers to use a dose of less than 25 milligrams of resveratrol, or the equivalent of that found in about 13 bottles of red wine.

The researchers recently tried the combination in a small trial involving 50 people and found it increased the activity of a substance called NAD+ that plays a key role in maintaining healthy cells. They now hope to test it in Alzheimer’s patients, on the basis of experiments in mice showing that higher levels of NAD+ protect nerve cells from damage.
Jupiter Orphan Therapeutics says its resveratrol product appears to slow the substance from being broken down in the body. The concentration of resveratrol in the blood of mice who took Jupiter’s product, called Jotrol, was 17 times as high as in those on regular purified resveratrol, says Christer Rosén, Jupiter’s founder and chief executive. He says the company is currently seeking patents for the product.

Murdoch Childrens Research Institute, in Melbourne, Australia, says it has agreed to test Jupiter’s formulation in patients with Friedreich’s ataxia, a rare disease that causes people, mostly children and teens, to gradually lose control of their limbs. An earlier, 24-person study suggested that a high dose of resveratrol could improve movement but also led to gastrointestinal side effects.

Dr. Turner, of Georgetown University, says his research team also plans to test the Jupiter product in a follow-up study to its Alzheimer’s trial.

Until scientists someday succeed in packaging resveratrol for people, the best vehicle for the substance appears to be the oldest one. “The only reliable source,” says Dr. Bertelli, “is a glass of red wine.”

Write to Denise Roland at Denise.Roland@wsj.com